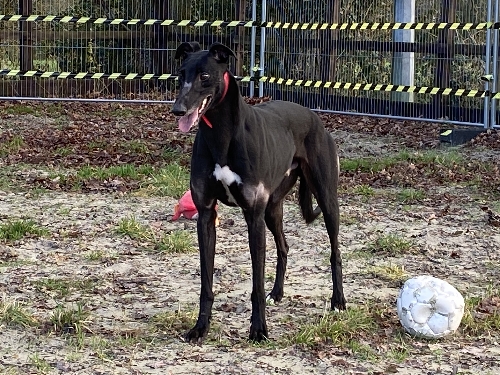 Storm is in kennels near Fleet, Hampshire, he arrived with us on the 4th January 2020 and he was born on the 9th December 2016.

This lad is a friendly and an active boy who enjoys being around people.

He loves to play with toys, his favourite being soft ones, that he can enjoy running around with, his party trick is to throw them high and catch them before they reach the floor!

Storm enjoys his walks and is keen to get on the move however he has a strong chase instinct and will need a savy owner, who is prepared to put the work in to train this boy. He enjoys his trips out in the car and will happily jump in by himself.

He has met other breeds of dog and he currently needs more socialisation before he will accept smaller breed of dog as friends. 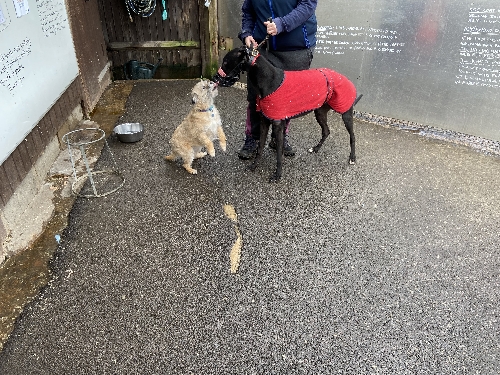 Storm allowing Chloe to give him kisses.

Storm knows his name and has become very responsive to his handler, he will come away from standing near to another dog when he is called (he is on a lead) and also respond well to different commands given when in training sessions.  Greyhound Lifeline will support his new owners with effective strategies to use when training him around other breeds.

Storm would be best suited to a home with older teenagers or an adult only home, where his new owners can commit time to his training around other breeds of dog. 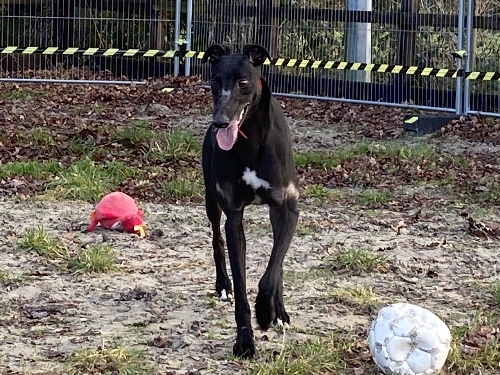 He is a boy who loves his food, he thinks if he eats it fast he gets another helping! What a cheeky boy he is!

Storm can be a little bit too confident at times, his new owner will need to show him how to behave when he gets excited in order for him not to get himself told off!  He won’t win any competitions for his looks, Storm has a few bald patches, however his love and personality will make up for the fur that is missing.

Anyone interested in adopting Storm should contact the rehoming team who can update them on his progress around other dogs.