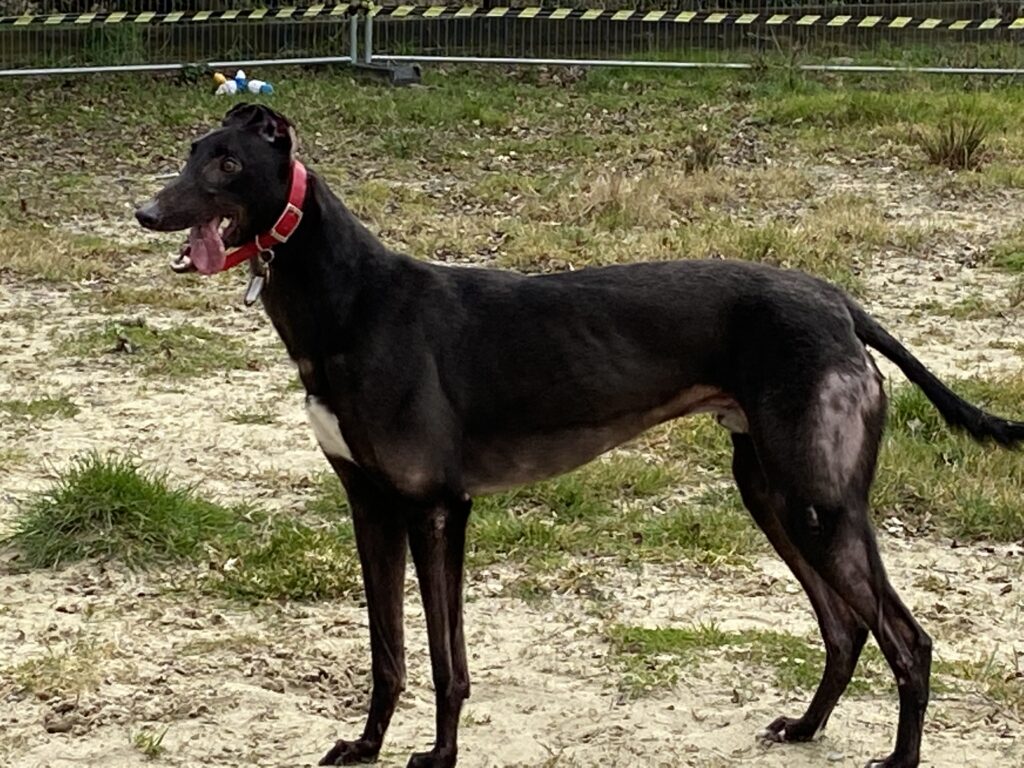 Nacho is in kennels near Fleet, Hampshire, he arrived with us on the 11th March 2021 and he was born on the 2nd of September 2017.

He is a friendly boy, always has a smile on his face and you may even get his smile as he walks towards you!  He doesn’t know which part of his body he should show his happiness through with his wiggly bottom and his bouncy legs that spring around you, whilst he shows you his excitment. 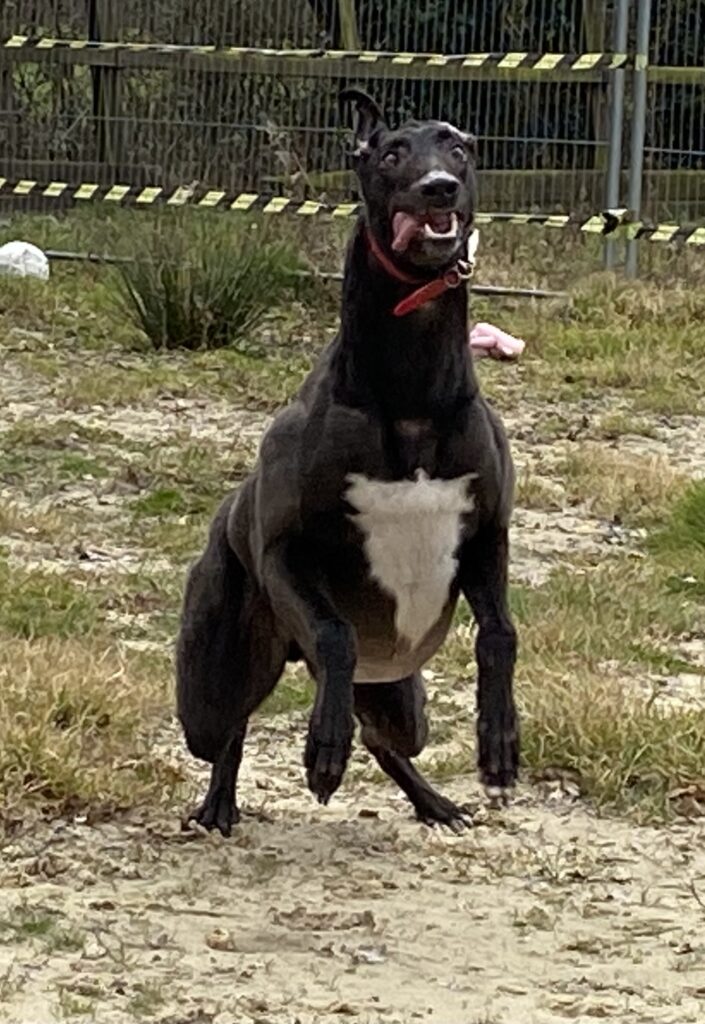 Nacho deciding to say hello to you!

Nacho does suffer from corns on his front paws, this is a common occurance, seen in recently, retired greyhounds.  Treatment for corns is easy to maintain and keep on top off so the greyhound can have a restful, enjoyable retirement with their new family! 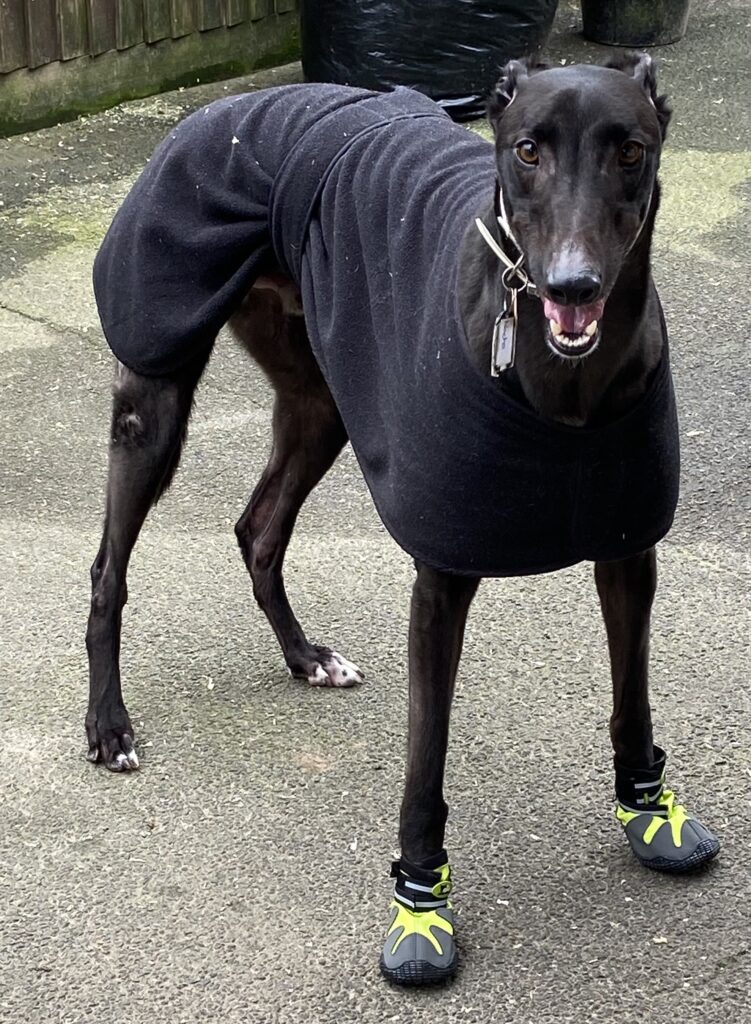 We will support any new family taking on a greyhound with corns, with advice on how to maintain, creams that work well with keeping the pads soft, advice on good boots for the greyhound to wear and how to remove a corn.  If the family are local we will offer to hull the corn for them on a regular basis if they would prefer.

The boy is a real gem, he is very patient and will lay down while you give him a pedicure!  Nacho isn’t fussed when you remove the corns, he’s little front leg paws you as he asks for more cuddles whilst the corn is being taken out. 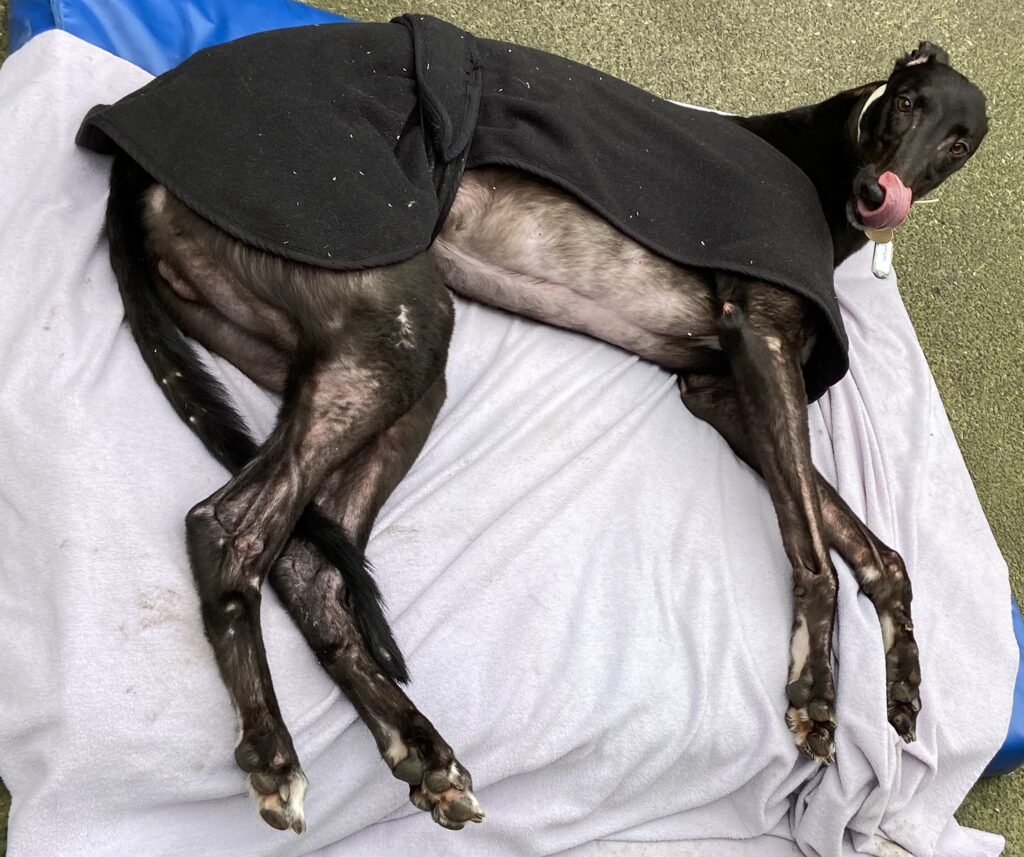 Nacho deciding that he doesn’t want to move after his corn treatment!

Corns are not painful but are just uncomfortable when they raise themselves above the pad surface.  Keeping the corns well managed through weekly care – cream being applied and corn filed down, will keep the pads soft and the corns under control.  Nacho has some rather lovely socks (made by one of our volunteers and can be purchased from our on-site shop) that he wears whilst the cream is soaking in.  He enjoys his special time as he gets extra cuddles and nice treats! Corns are easy to remove and can be out within a few minutes.  You really wouldn’t know that Nacho had corns as he behaves just like any other dog! 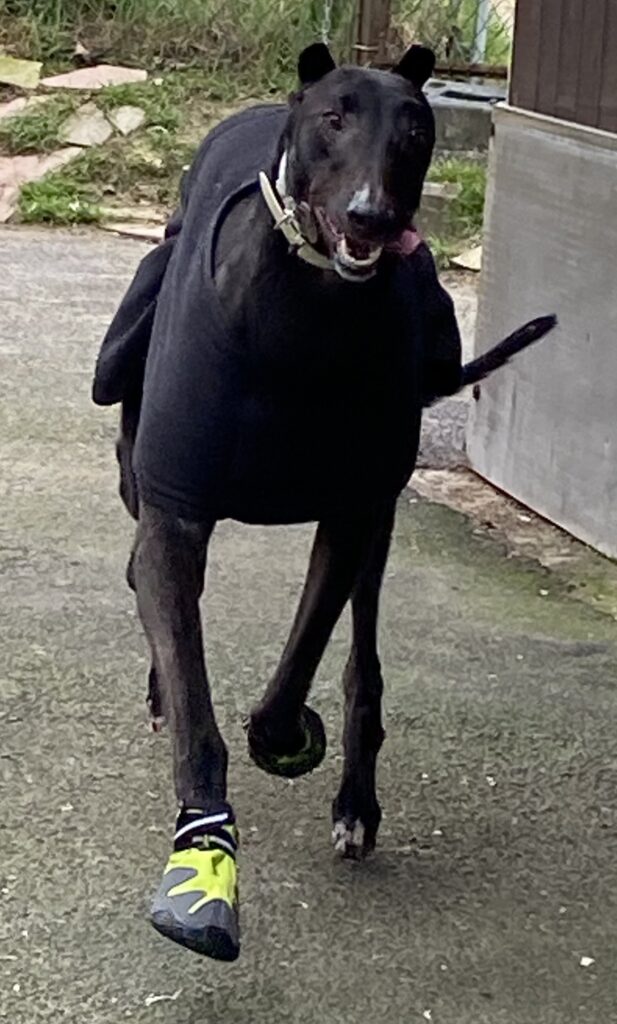 This enjoyable lad enjoys going out for walks, he happily wears his boots on his front two feet and enjoys finding all the latest smells.  He may have his head in the undergrowth more than it is in the air at times!  You can’t but love, fall for him and his cheekiness!

He loves to chase after thrown toys and will run off with them until you throw another one. 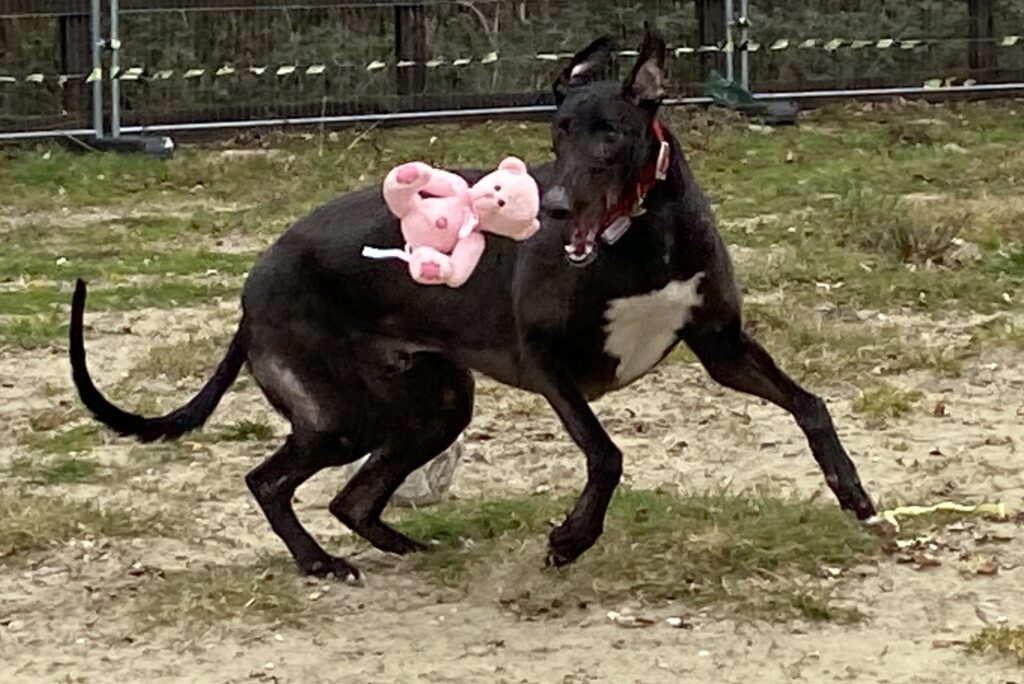 Nacho loves running around with his human friends, he will play bow with you and enjoys a good game of ‘catch that human’ as he runs off after you! He is such a loveable chap with a fantastic character and it won’t be long before he shows you his nutty side too! 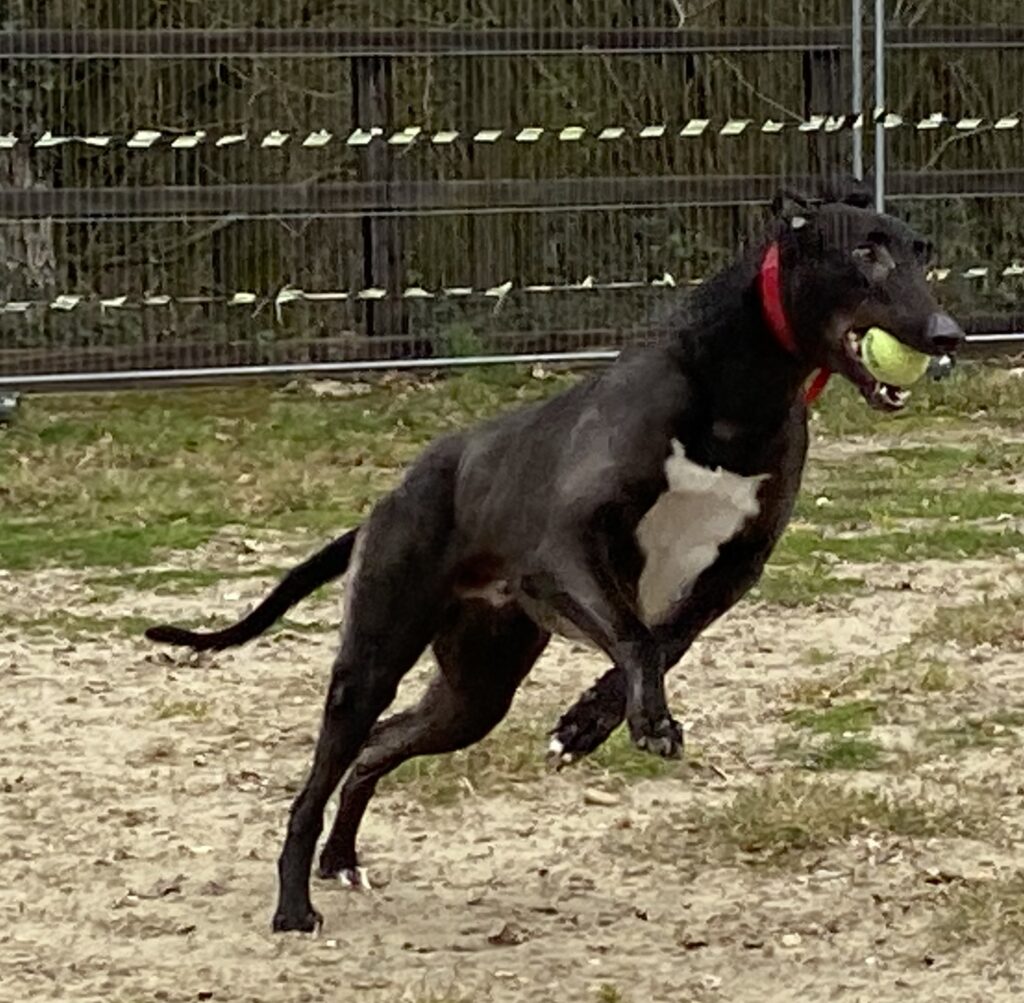 If you enjoy being out and about than this is the boy for you, otherwise Nacho will amuse himself with a toy or a kong (especially if it has something smelly inside)!

This lad would be best suited to a home with children over 8 years or an adult only home.  Nacho could be a companion to another greyhound or live on his own if he had company for some of the day.

Nacho won’t win any beauty contests any time soon, with his bald bottom, elbows and back of ears, however he is such a gentle soul and allows the kennel hands to apply cream to these places to promote the hair to grow back.  I think he rather likes the massaging and sometimes you can see he is going to sleep, whilst having his extra special time!  When Nacho’s hair has grown back he will be the beauty king of the kennels. 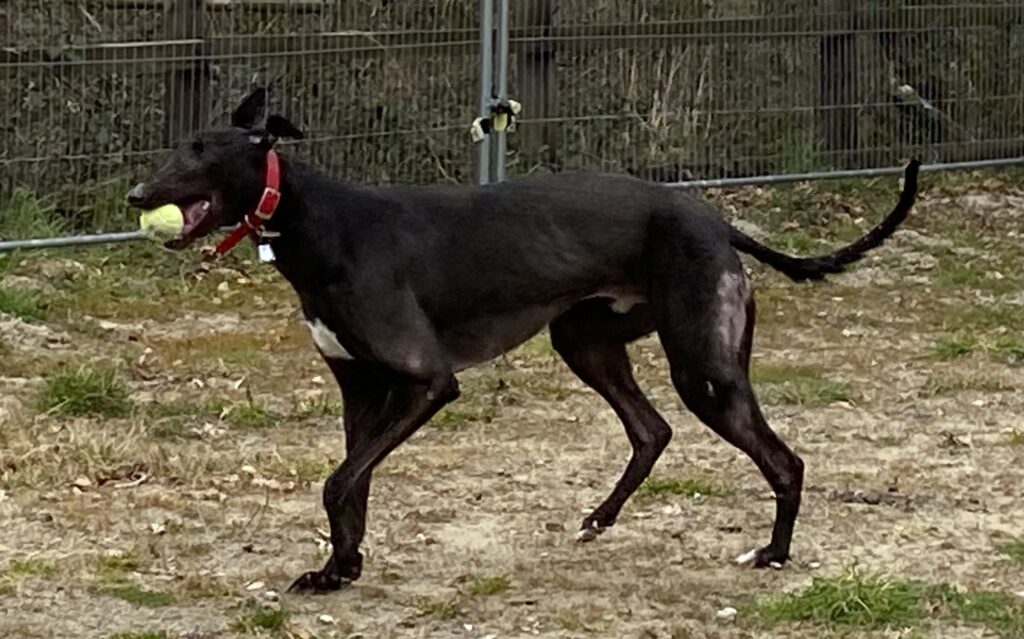 He is a boy who loves his food, he has an appetite that can go on and on!  Nacho has a fantastic set of ears, that will make you laugh at the positions that they can get into!

Nacho has been tested with other breeds of dog, he is a bit confused as to what some smaller dogs are and not sure on some who run very fast at you.  He listens to corrections and it won’t take long for this chap to make lots of new friends.  Nacho just wants to please his owner and learn the right way to behaviour in all situations.

Who can resist Nacho with his funny antics, his wonky ears and the happiness that beams from the tip of his nose to the end of his tail!  Call the adoption team to book a viewing, he certainly won’t let you down!