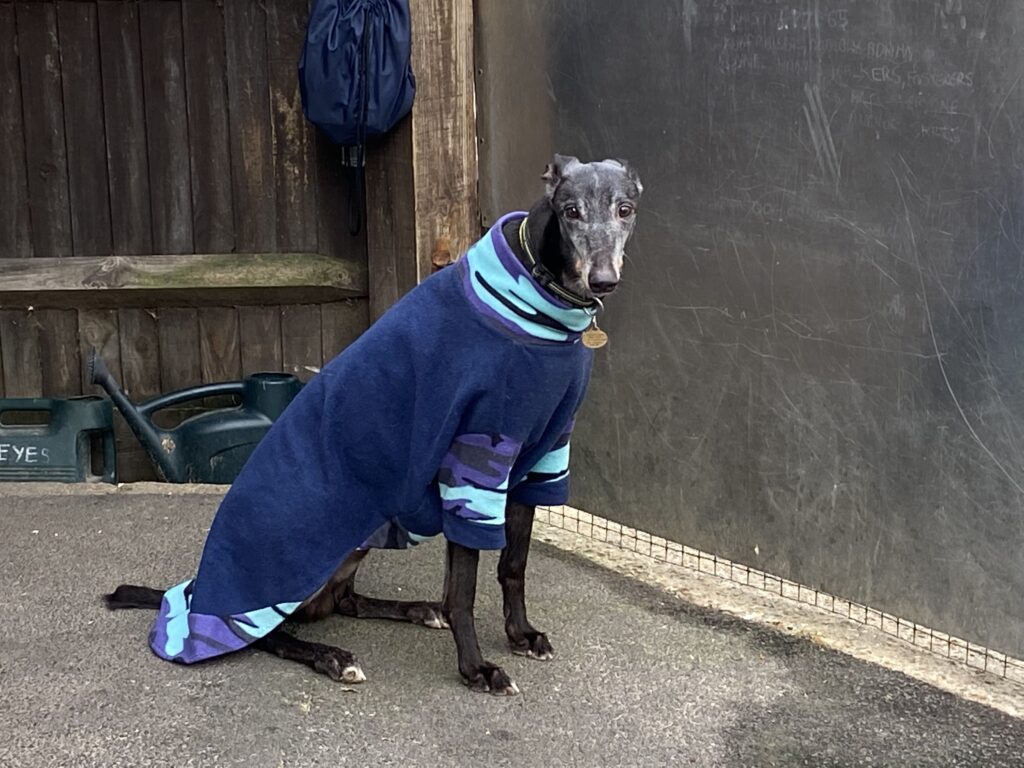 He is a friendly, calm and affectionate old boy, who is learning what home life is like after spending so much time in kennels. 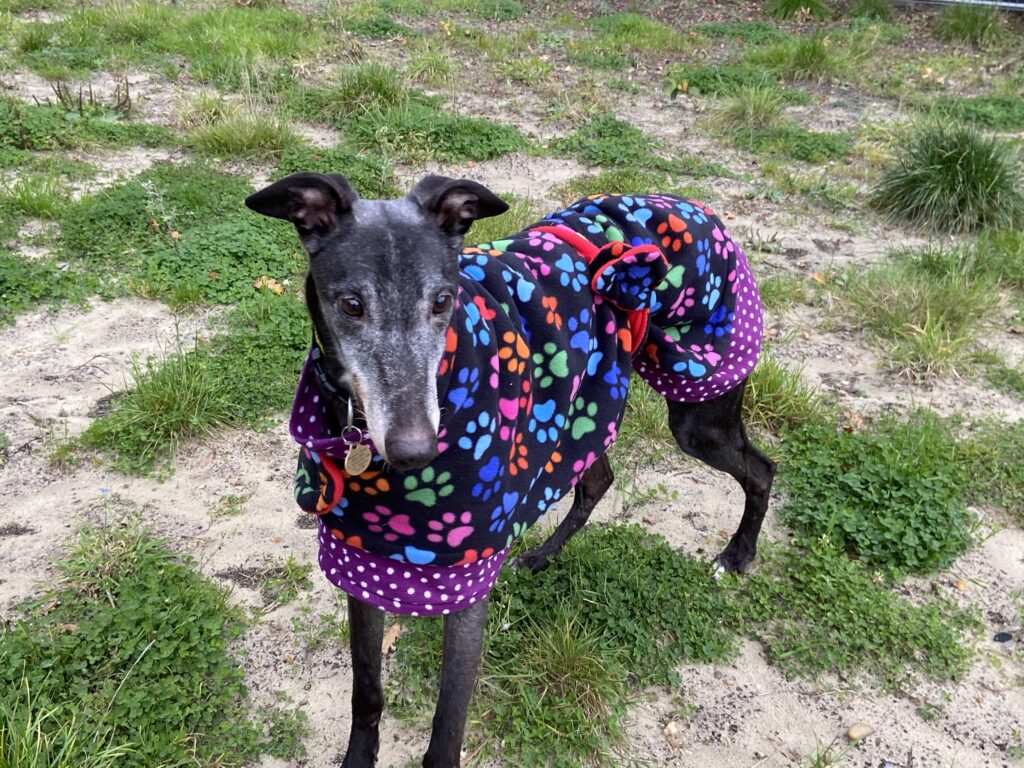 Epic has spent his entire life in racing kennels, before coming to Greyhound Lifeline.  He had never seen outside of his kennel, been for a walk, seen cars, in a house, heard all the every day sounds that we all take for granted.  Epic is learning fast and is starting to enjoy life outside of the kennel walls, however sometimes life is too scary for this old boy and he needs reassurance from the people around him, slowly he is starting to enjoy more and more.  Epic is sharing his foster home with seven other greyhounds, one of which is his kennel mate Dusty that he spent his entire racing life with.

He is learning to play with people and with his greyhound friends, Epic is crate trained and due to his background prefers to eat his meals inside of his crate, where he feels secure, he is however starting to eat his meals with the other dogs in the house.  Epic is starting to enjoy his meals and is rather liking his puppy food, which he is on to help fatten him up a bit.

Epic doesn’t climb the stairs, maybe that’s an adventure to do in the future, once he has got used to home living!  He is quiet at night and sleeps well.  This old boy has saved up his energy, whilst spending those many years of sitting in a racing kennel and now thinks he is a youngster.  He has always got a waggy tail, meets new people with growing confidence with his human friends giving him reassurance.  Epic will need to be rehomed with another sighthound, he looks to his doggie friends for advice in new situations.  This is due to spending so much time with another greyhound whilst in racing kennels.  He is however making huge progress, he has only been with us for a few weeks and has learnt so much.  Epic does enjoy snuggling up to another greyhound for sleepy time. 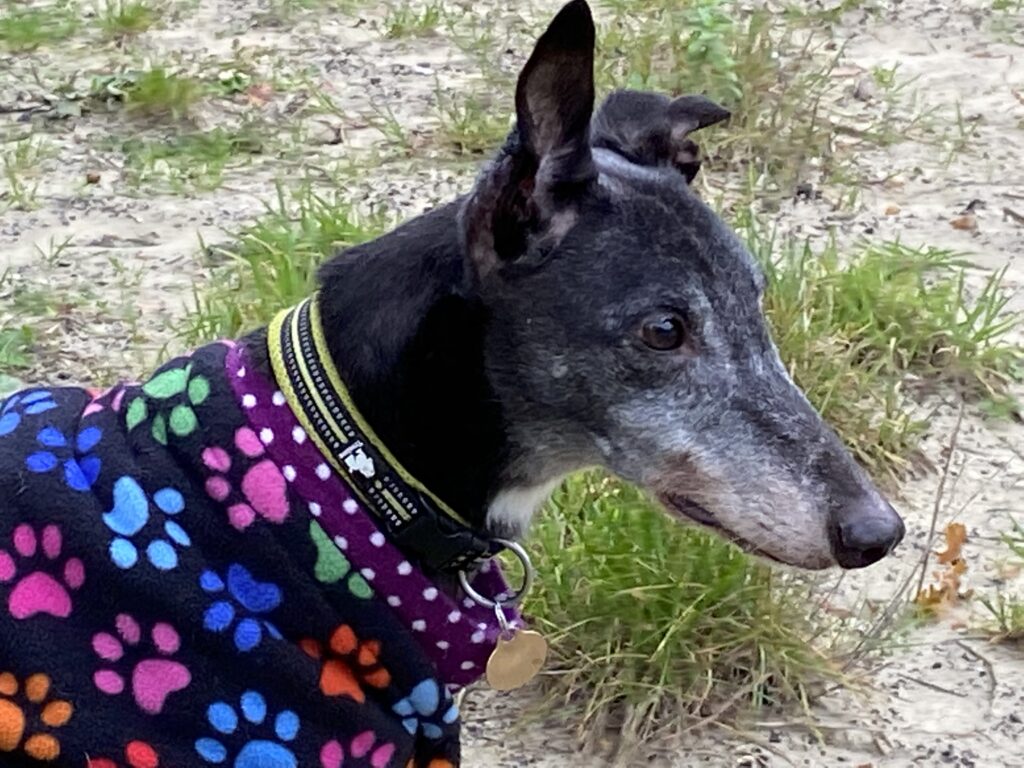 He is housetrained and the foster home he lives in he gets to see lots of other people.  This has helped Epic build his confidence up in a safe environment where reassurance can be given.  He really does want to say hello which he shows with his always happy tail. Epic also knows how to sit, he will wait patiently for his food to be served and watch your every move incase you drop anything!

Epic walks nicely on a lead, he travels well and can get himself in and out of the car by himself.  This boy is a must to be seen if you love the oldies, he has oodles of character that is starting to show, he too behaves as a youngster, making up for all the time he spent in kennels.  His favourite game is an early game of play bowing with his canine friends, first thing in the morning! He has given us no cause for concern around any other breed of dog or children, that we have met on our walks or our trips to the vets!  We haven’t seen any small dogs yet so that we be another test to do!

Epic has just started to play with toys, he has also begun running in our sand school and will join in with a good game of chase me with the much younger greyhounds.  He can’t play for too long without his little old legs needing a rest.

Epic is a delight to have in foster and he is going to make someone very happy with all the love that he has to give.  He has had a major dental, with only three teeth left, but these may still need to come out when he goes back in to be castrated, in a few weeks time.   Since his dental, he has started to enjoy eating again, he is having three small meals a day to gain weight steadily.  He has become a lot more sociable, happy and is bouncing around like a tigger!  Epic will need to be castrated once he is over his first operation and will then need to start his vaccinations of again as he is completely out of date.  This old boy will have had his full MOT before he has left Greyhound Lifeline and ready to start his own special home.

Is there a family out there who can give this old boy the home that he so deserves?

Who can resist a grey face with a story to tell like Epic’s?

There really isn’t a bad bone in this lad, a home of his own will make this lads dream come true.  Let’s give him a home where he enjoy life and be spoilt to make up for all those years he has lost being in a home environment. 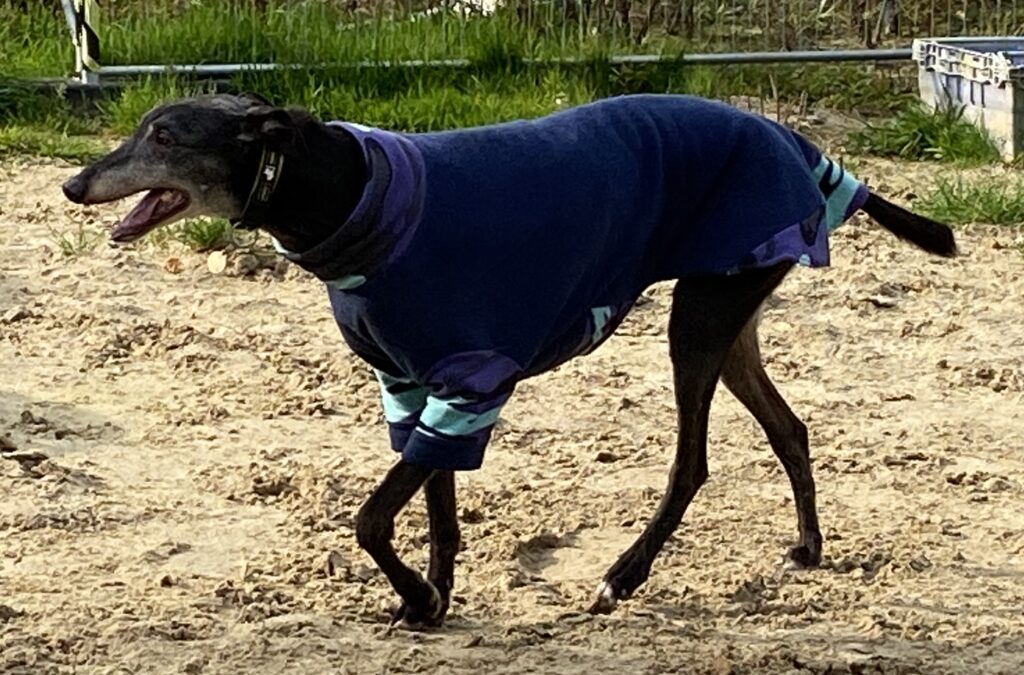